The National Medical Awards are aimed at recognising the invaluable contributions of the country’s independent primary care doctors and are anticipated to be the industry’s most sought-after award. Categories are based on peer nomination and include:

"Medici fully supports independent practitioners and many in our Medici doctor community have chosen our application for the very independence it creates— as well as the freedom to diagnose and prescribe anytime and anywhere. We are proud to support ASAIPA members and the recognition these awards provide to those who are changing the way that people access healthcare."

"ASAIPA is honoured that Medici chose to support the first National Medical Awards (NMA) and we look forward to sharing the stage with them whilst celebrating our local practitioners.”

Medici is the communication platform of record in South Africa, allowing doctors to offer their patients valuable health services via smartphone anytime, anywhere. Practitioners using Medici report up to six times increase in productivity. The company was launched in South Africa by Dr. Clinton Phillips and is headquartered in Austin, Texas.

Want to get started with Medici today? Download the app for Android or iOS. 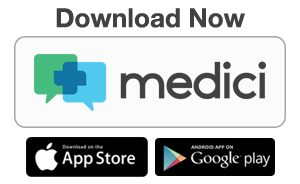